So to get my new company up and rolling here are a couple of websites, with the help of a few programmers, I made using Flash and some crazy XML / Action Script coding.

The first one is cool especially because I was able to support the local community a bit by taking on the gig.  It is the website for the city of Miramichi’s new bus transit system.  I managed to sneak in a few characters, and do some photography for the site (although some of the photos used were provided by another photographer).   Big props go out to… Jeremiah Percival… who helped me a lot with some of the programming, and Rich Gould, (previous client, current friend, and co-owner of Razor Creative ), who hooked me up with Jeremiah, (when one of my other programmers became unavailable).  I am particularly proud of how the “weather app” and the “interactive bus-route-map” turned out. 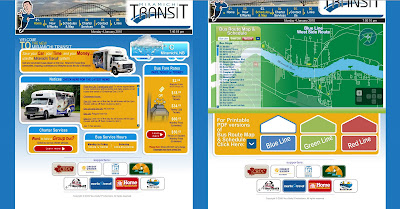 Here is the link to the Miramichi Transit’s final website http://miramichitransit.com/

This next one was actually done for some my former Fatket comrades, who (amongst other things)had formed a new company called “Majestic Weiner Dog Productions.”  I also designed their logo, business cards, and stationary, as well as creating all the conceptual artwork for their TV series pitch “Raku.”  I really like the way this site came out there are a bunch of fun little components to it. 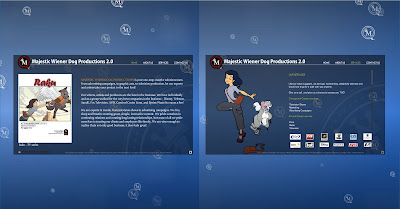 And here is the link to “Majestic Weiner Dog Production’s” website  http://majesticwienerdog.com/
Of course the irony of completing these is that I have yet to finish putting together my own company site, but oh well… you’ve got to put the horse before the cart, and food on the table, and all that… so hopefully this blog will due in the meantime.
Artwork, Website designs, and some photography done Andrew “Big Show” Blodgett and Ye-a Baby! Productions.
Categories: Andrew Blodgett, Artwork, Concept