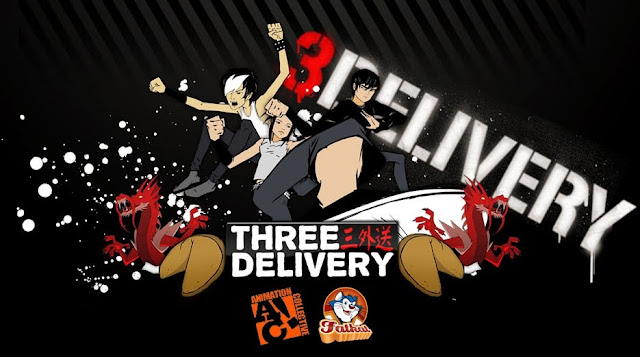 This is a music video/promo I put together back in late 2008 for the TV series “Three Delivery” which was produced as a animation collaboration between Animation Collective and Fatkat Animation Studios.  The show was animated in Flash with a bit of a traditional approach (thats right… hold your breath… some actual drawing…. hehehe), and offline post sweetness was added in AfterEffects, with a bunch of subtle, and not so subtle editing in FinalCut.

We were a bit spread thin on this TV series so I ended up overseeing the offline Post Production, as well as being the series main Editor, and well due to blah, blah, blah, along with a few other brave Fatkat souls, I also ended up taking care of a lot of animation and continuity polishing and fixes on top of everything else while we were at it.  Still all and all the crew put in an amazing effort, the show was delivered on time, and I think the series came out looking pretty good.  And, although a little crunched for time, I like the way this music video/promo came out too, for the most part 😉

For the above music video/promo itself: the animation production was done by the Fatkat crew, Robert Lloyd and myself took care of the post production, and I edited this together. The music is the “Three Delivery Theme Song” by the band Ten Minute Turns.  The dialogue and sound effects audio is from the series.

Andrew “Big Show” Blodgett was the Offline Post Production Supervisor, Lead Post Effects Designer, Editor, and did a bunch of miscellaneous animation and continuity fixes on this TV series