The Walking Dead – the much awaited AMC TV series based on the hugely successful comic book by Robert Kirkman will launch on Halloween this year. Until then, fans have had to make do with a few teaser trailers…
…but one enterprising soul, Daniel Kanemoto, has gone one step further. He has created his own opening titles to the show – and the results are excellent. If AMC haven’t already sorted out their opening titles, then they should really get on the phone to Mr Kanemoto right now…!

This spec title sequence was created using artwork ripped from the pages of the comic, originally illustrated by Charlie Adlard and Tony Moore. As well as referencing the story’s comic book roots it is exceptionally well executed. Kanemoto made it after a moment of inspiration at this year’s Comic-Con. If Frank Darabont (the director of the TV series whose past credits include The Shawshank Redemption and Frankenstein) is watching – dump your opening sequence and swap it for this one please! 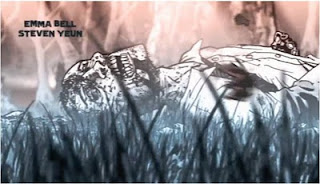 For those of you who don’t know what the fuss is all about, where have you been? here is the official trailer for the upcoming TV series. If you like your zombie movies, like us, the thought of a whole series (especially one based on such a brilliant comic) is enough to grab the nearest Timelord, hijack his Tardis and take it forward to October 31. OK, so here is the trailer – and it looks good.