Fatkat did this animation test back in early 2007. Nailed it, client loved it, we later went on to help develope the series.

Big thanks to Andy Coyle and team who made this awesome animation demo.

For those of you interested, you can read more on “Cold Hard Flash” here: http://coldhardflash.com/2007/08/fatkat-teams-up-with-supa-strikas.html 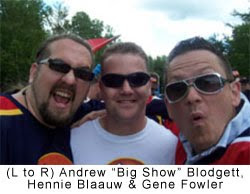 I was briefly involved with this series as a Producer and Production Supervisor while it was being developed as a series, before the production was moved back overseas.

Now, check this intro out, it seems to have a mix of work from every studio who was ever involved in the project, but it looks pretty good.  And HUGE KUTTOOS to my friends at Dacapo for creating a KICK-ASS theme song for the series.

Some stuff Andrew “Big Show” Blodgett was the Producer and Production Supervisor on.

Supa Strikas the animated TV series is based on a successful soccer comic book by the same name that has a massive monthly readership in excess of 10 million people, across 4 continents and in multiple languages. Here is a link to a video spot on CNN talking about it: http://www.cnn.com/video/?/video/international/2011/01/11/ia.supa.strikas.bk.a.cnn

You can see samples of the Supa Strikas comic book here: http://www.supastrikas.co.za/comic

South African based, Strika Entertainment is the company responsible for both the comic book and the TV series.  http://www.strika.com/communications/interactive.php?go