Following up on my previous post “Sir Ken Robinson: Do schools kill creativity?” — Creativity expert Sir Ken Robinson challenges the way we’re educating our children. He champions a radical rethink of our school systems, to cultivate creativity and acknowledge multiple types of intelligence. 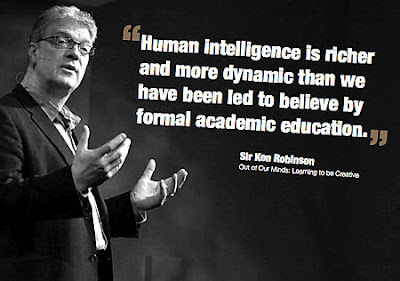 Why you should listen to him:

Why don’t we get the best out of people? Sir Ken Robinson argues that it’s because we’ve been educated to become good workers, rather than creative thinkers. Students with restless minds and bodies — far from being cultivated for their energy and curiosity — are ignored or even stigmatized, with terrible consequences. “We are educating people out of their creativity,” Robinson says. It’s a message with deep resonance. Robinson’s TEDTalk has been distributed widely around the Web since its release in June 2006. The most popular words framing blog posts on his talk? “Everyone should watch this.”

A visionary cultural leader, Sir Ken led the British government’s 1998 advisory committee on creative and cultural education, a massive inquiry into the significance of creativity in the educational system and the economy, and was knighted in 2003 for his achievements. His latest book, The Element: How Finding Your Passion Changes Everything, a deep look at human creativity and education, was published in January 2009.

In this poignant, funny follow-up to his fabled 2006 talk, Sir Ken Robinson makes the case for radical shift from standardized schools to personalized learning — creating conditions where kids’ natural talents can flourish.

To learn more about Sir Ken Robinson and his work click here.
To check out more TED Talks click here.