Back in April 2009, Stink Digital and Tribal DDB Amsterdam unleashed the fury with an incredible campaign for Philips’ Cinema 21:9 HD Television. Scoffing at conventional product launch wisdom (i.e., television commercials, print ads, repeat) Philips’ brand team put their eggs into the digital basket; creating a flashy micro site with dreams of deeper consumer engagement. But they needed a hook. A legitimate reason to actually visit and stay a while. The solution? A short film called Carouel.

Best continuous shot ever? That’s for you to decide.

note the length of the film ;O)

Thoughts? It is a nice touch how it ends where it starts. For a frozen moment in time You still feel a sense of development. As the camera guides us through the sequence you learn more about the crazy scenario taking place. Who knew there was so much money at a hospital?

As people slowly picked their jaws off the ground the awards started rolling in, culminating with a Film Grand Prix and Silver Cyber Lion at Cannes (the ad industry’s answer to the Academy Awards). But how did they do it? Was it all CGI? Check the two videos below for a brief explanation into the making of. 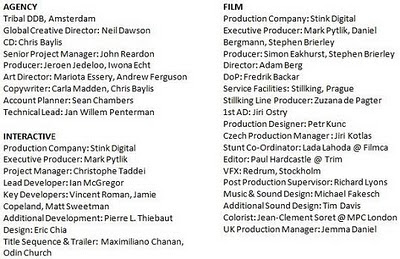 It’s been said that imitation is the best form of flattery so this should make the Philips team blush:

Opening sequence for the season 10 premiere of CSI, which aired September 24, 2009