This is just gorgeous. 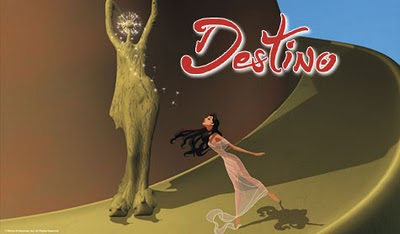 Destino is an animated short film released in 2003 by The Walt Disney Company.  Destino is unique in that its production originally began in 1945, 58 years before its eventual completion.  The project was a collaboration between Walt Disney and Spanish painter Salvador Dalí.

The original version featured music written by Mexican songwriter Armando Dominguez and performed by Dora Luz  —- however finding an original copy of this short film, with its original music, has proven to be rare (I did have a link to a copy, but that source seems to be gone now) — so here is the original animation with alternate music from dutch composer and music producer Mari Koning.