Paperman is the latest and much-praised short from Walt Disney Animation Studios, which will be shown in front of the studios newest animated feature, Wreck-It Ralph, opening early next month.

It is an exciting time to be working in the animation medium. The short was created using a fascinating blend of computer-generated and hand-drawn animation techniques, utilizing a new Disney in-house technology called Meander, a vector based drawing tool that gives the artist a lot of power to manipulate the drawn line.

“We brought together as best we could the expressiveness of 2D drawing immersed with the stability and dimensionality of CG. It really goes back to working with Glen Keane on Tangled, watching him draw over all the images.”

“… We discovered that he (Brian Whited) was programming this thing and building this software – and we just totally took it over, hijacked him and his program and got him on the project.  It’s not like a texture map.  It’s
just like painting on the surface of the CG. It actually moves on a 2d layer that’s driven by the CG.  And the greatest thing about the tool is that all of that drawing is right up front with the hand drawn animator; right there in their space so they can see what they’re doing.”

“… I loved Tangled – and I feel like we’re in a golden age right now with CG – all the studios today are competing with a stylized form of realism.  I have to believe that’s not the only way that animation can look. I feel like 2D needs to come into the place where it can compete with a big blockbuster movie that has tons of cg and so forth.  We have to push the processes and techniques and see where we can take them.”

A video has been released showing a breakdown of this new technique and technology in action, check it out…

“There was drawing everywhere…” 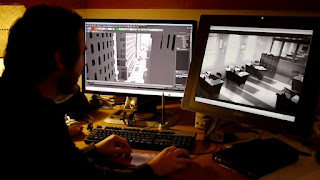 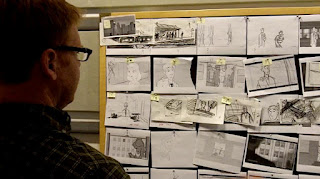