Coincidentally enough I had a conversation with someone yesterday about space, time, the ‘big bang theory’, and the origins of man… 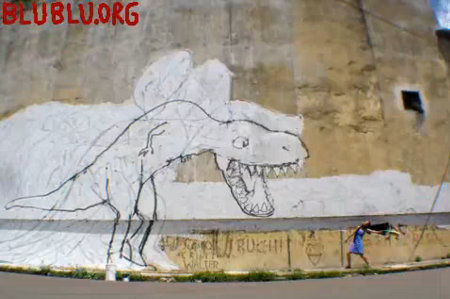 …now here with the answers is… painter/stop-motion animator Blu with his new short film “BIG BANG BIG BOOM”, a 10-minute “moving” painting showing the evolution of the earth, from big bang to eventual nuclear destruction. Did I mention there were several minutes of dinosaurs? *zipping pants* Because there were. RAWR! God, I can’t even imagine how much paint the whole thing required. Gallons. Somebody got approved for a Home Depot credit card! (Buy me a chainsaw)

Watch the video now, and stick it to the man for 10 whole minutes.